Development on Windows is Painful

This post contains opinions. They may differ from the opinions you hold, and that's great. This post is not targeted at any individual person or organization. This is a record of my frustration at trying to get Windows to do what I consider "basic development tasks". Your experiences can and probably will differ. As a reminder, I am speaking for myself, not any employer (past, present and future). I am not trying to shit on anyone here or disregard the contributions that people have made. This is coming from a place of passion for the craft of computering.

With me using VR more and more with my Quest 2 set up with SteamVR, I've had to use windows more on a regular basis. It seems that in order to use Virtual Desktop, I MUST have Windows as the main OS on my machine for this to work. Here is a record of my pain and suffering trying to do what I consider "basic" development tasks.

I am a tortured soul that literally thinks in terms of Vim motions. This allows me to be mostly keyboard-only when I am deep into hacking at things, which really helps maintain flow state because I do not need to move my hands or look at anything but the input line right in front of me. Additionally, I have gotten very used to my Emacs setup, and specifically the subtle minutae of how it handles its Vim emulation mode and all of the quirks involved.

I have tried to use my Emacs config on Windows (and barring the things that are obviously impossible such as getting Nix to work with Windows) and have concluded that it is a fantastic waste of my time to do this. There are just too many things that have to be changed from my Linux/macOS config. That's okay, I can just use VSCode like a bunch of apologists have been egging me into right? It's worked pretty great for doing work stuff on NixOS, so it should probably be fine on Windows, right?

So let's try opening VSCode and activating the Vim plugin vscodevim. I get that installed (and the gruvbox theme because I absolutely love the Gruvbox aesthetics) and then open VSCode in a new folder. I can :open a new file and then type something in it. Then I want to open another file split to the left with :vsplit, so I press escape and type in :vsplit bar.txt. Then I get a vsplit of the current buffer, not the new file that I actually wanted. Now, this is probably a very niche thing that I am used to (even though it works fine on vanilla vim and with evil-mode), and other people I have asked about this apparently do not open new files like that (and one was surprised to find out that worked at all); but this is a pretty heavily ingrained into my muscle memory thing and it is frustrating. I have to retrain my decade old buffer management muscle memory.

Vim has a feature called whichwrap that lets you use the arrow keys at the end/beginning of lines to go to the beginning/end of the next/previous line. I had set this in my vim config in November 2013 and promptly forgotten about it. This lead me to believe that this was Vim's default behavior.

It apparently is not.

In order to fix this, I had to open the VSCode settings.json file and add the following to it:

Annoying, but setting this made it work like I expected.

vscodevim doesn't do this by default, however there is another setting that you can use to do this:

And then you can get the kill register to work like you'd expect.

As far as I can tell you just can't configure this. For a work thing I've had to resort to disabling the Go extension, reloading VSCode, waiting for the direnv settings to kick in and re-enabling the Go extension. This would be so much easier if I could just say "hey you go after this is done", but apparently this is not something VSCode lets you control. Please correct me if I am wrong.

This is probably where I'm going to get a lot more pedantic than I was previously. I'm used to st as my terminal emulator and fish as my shell. This is actually a really nice combo in practice because st loads instantly and fish has some great features like autocomplete based on shell history. Not to mention st allowing you to directly select-to-copy and right-click to paste, which makes it even more convenient to move text around quickly.

Git is not a part of the default development tooling setup. This was surprising. When I installed Git manually from its website, I let it run and do its thing, but then I realized it installed its own copy of bash, perl and coreutils. This shouldn't have surprised me (a lot of Git's command line interface is written in perl and shell scripts), but it was the 3rd copy of bash that I had installed on the system.

As a NixOS user, this probably shouldn't have bothered me. On NixOS I currently have at least 8 copies of bash correlating to various versions of my tower's configuration. However, those copies are mostly there so that I can revert changes and then be able to go back to an older system setup. This is 3 copies of bash that are all in active use, but they don't really know about eachother (and the programs that are using them are arguably correct in doing this really defensively with their own versions of things so that there's less of a compatibility tesseract).

Once I got it set up though, I was able to do git operations as normal. I was also pleasantly surprised to find that ssh and more importantly ssh-keygen were installed by default on Windows. That was really convenient and probably avoided me having to install another copy of bash.

Windows Terminal gets a lot of things very right and also gets a lot of things very wrong. I was so happy to see that it had claimed it was mostly compatible with xterm. My usual test for these things is to open a curses app that uses the mouse (such as Weechat or terminal Emacs) and click on things. This usually separates the wheat from the chaff when it comes to compatible terminal emulators. I used the SSH key from before to log into my server, connected to my long-standing tmux session and then clicked on a channel name in Weechat.

I clicked again to be sure, nothing happened.

I was really confused, then I started doing some digging and found this GitHub comment on the Windows Terminal repo.

Okay, so the version of ssh that came with Windows is apparently too old. I can understand that. When you bring something into the core system for things like Windows you generally need to lock it at an older version so that you can be sure that it says feature-compatible for years. This is not always the best life decision, but it's one of the tradeoffs you have to make when you have long-term support for things. It suggested I download a newer version of OpenSSH and tried using that.

I downloaded the zipfile and I was greeted with a bunch of binaries in a folder with no obvious instructions on how to install them. Okay, makes sense, it's a core part of the system and this is probably how they get the binaries around to slipstream them into other parts of the Windows image build. An earlier comment in the thread suggested this was fixed with Windows Subsystem for Linux, so let's give that a try.

Windows Subsystem for Linux is a technical marvel. It makes dealing with Windows a lot easier. If only it didn't railroad you into Ubuntu in the process. Now don't get me wrong, Ubuntu works. It's boring. If you need to do something on a Linux system, nobody would get fired for suggesting Ubuntu. It just happens to not be the distro I want.

However, I can ssh into my server with the Ubuntu VM and then I can click around in Weechat to my heart's content. I can also do weird builds with Nix and it just works. Neat.

I should probably figure out how hard it would be to get a NixOS-like environment in WSL, but WSL can't run systemd so I've been kinda avoiding it. Excising systemd from NixOS really defeats most of the point in my book. I may end up installing Nix on Alpine or something. IDK.

They say you can learn a lot about the design of a command line interface by what commands are used to do things like change directory, list files in a directory and download files from the internet. In PowerShell these are Get-ChildItem, Set-Location and Invoke-WebRequest. However there are aliases for ls, dir, cd and wget (these aliases aren't always flag-compatible, so you may want to actually get used to doing things in the PowerShell way if you end up doing anything overly fancy).

Another annoying thing was that pressing Control-D on an empty prompt didn't end up closing the session. In order to do this you need to edit your shell profile file:

Then you add this to the .ps1 file:

Save this file then close and re-open PowerShell.

If this was your first time editing your PowerShell config (like it was for me) you are going to have to mess with your execution policy to allow you to execute scrips on your local machine. I get the reason why they did this, PowerShell has a lot of...well...power over the system. Doing this must outright eliminate a lot of attack vectors without doing much on the admin's side. But this applies to your shell profile too. So you are going to need to make a choice as to what security level you want to have with PowerShell scripts. I personally went with RemoteSigned.

I use stuff cribbed from oh my fish for my fish prompt. I googled "oh my powershell" and hoped I would get lucky with finding some nice batteries-included tools. I got lucky.

After looking through the options I saw a theme named sorin that looks like this: 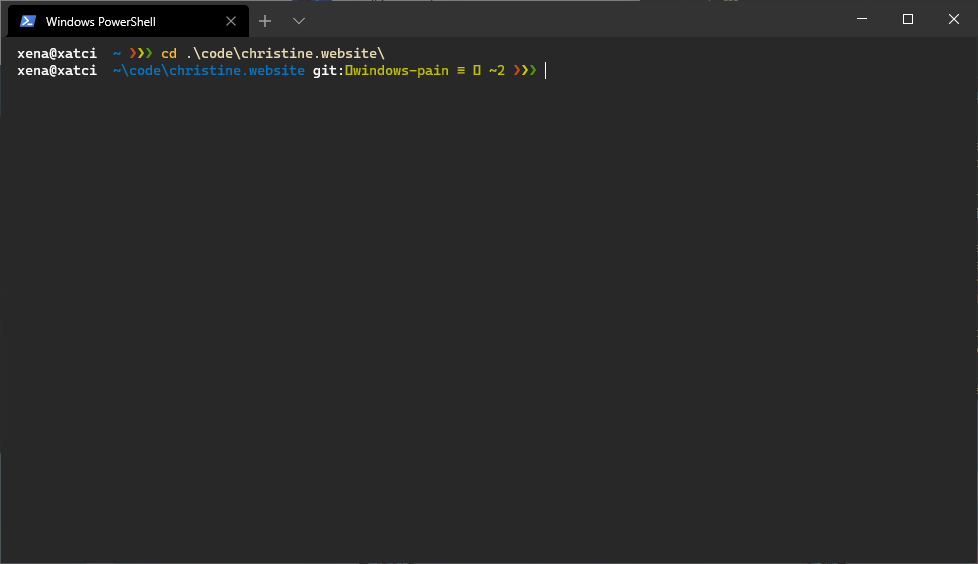 To get this I'd need to do everything in WSL and use Nix. VSCode even has some nice integration that makes this easy. I wish there was a more native option though.

The big thing that Windows gets really right as a developer is backwards compatibility. For better or worse I can install just about any program from the last 30 years of released software targeting windows and it will Just Work.

Overall, I think I can at least tolerate this development experience. It's not really the most ideal setup, but it does work and I can get things done with it. It makes me miss NixOS though. NixOS really does ruin your expectations of what a desktop operating system should be. It leaves you with kind of impossible standards, and it can be a bit hard to unlearn them.

The conclusion here is that there is no conclusion.

This article was posted on M03 03 2021. Facts and circumstances may have changed since publication. Please contact me before jumping to conclusions if something seems wrong or unclear.